What Does Cause and Effect Mean to Your Life?

A River Worth Riding: Lesson One
What does Cause and Effect Mean to Your Life? 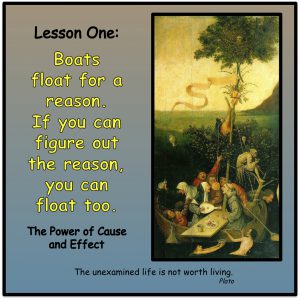 A fool insisted on riding the river backwards. Because of his experience and training, he believed that the best way to navigate was by steering away from the boats behind him. Every few days, he would crash into a boat in front of him and yell, “Why don’t you look where you’re going?!” And so he kept crashing, wondering why the river was so full of fools.

Einstein once defined insanity as, “Expecting to solve any problem from the same level of thinking that you were at when you created it.” In other words, if you’re expecting tomorrow to get any better without changing yourself today, you’re an idiot. By that definition, how many of us need our heads examined? We know that something is missing in our lives, but we keep waiting for someone else to fix our problems. We keep hammering away at the same problems with the same hammers, and then we wonder why nothing changes. We do exactly what we did yesterday, and we hope tomorrow will get better.

Have you ever heard the expression, “God only helps those who help themselves?”

The cause of the confusion is not laziness, but frustration. We all want to help ourselves, but too often we don’t know how to get started. We see only problems. We don’t always see where our problems came from in the first place. In order to solve problems, we need to understand the nature of cause and effect.

Cause and effect simply states that for every effect on the river, there is a specific cause, or causes. In other words, any situation that you experience in your life is the effect of something that caused it. If you can uncover the cause of a situation, then you can effectively change that situation. But if you try to change a situation without clearly understanding that situation’s cause, you can waste a lot of energy fixing the wrong things before you sit down exhausted, wondering why nothing has changed.

One of my students-of-the-river was so frustrated with her husband that she was considering leaving him. She wanted to know what I thought. I asked her to explain the specific cause of her frustration.

“He always expects me to do everything,” she told me. “I always have to pick up after him. He never picks up anything for himself. He comes home, opens a bag of chips, eats two and leaves the bag on the table for me to pick up. I’ve tried talking to him, but he doesn’t care what I want. He tells me to just hire a maid, but I don’t want to waste money on a maid. Besides, what maid will follow around behind him picking up his messes? A maid only comes once a week.”

“You want him to pick up after himself?”

“You have talked to him about what you want?”

As she realized her own illogic, she started to giggle.

She had made the same presentation to the same person over 24,000 times, and she had received the same response. Her experience was a classic case of cause and effect. She hadn’t changed her presentation, so she had no reason to expect a different effect. Her husband defined her actions as nagging, and she nearly believed him. But I define nagging as misunderstanding the nature of cause and effect. 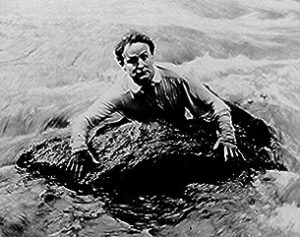 At this point in my story, people always interrupt to ask, “What did she do?” They want to know her technique, so they can run home and try it for themselves.

Well here, for the record, is “what she did.”

She even learned to use creative delegation and turned her husband’s clutter into a game for her kids. But most importantly, she stopped looking for happiness in the circumstances around her, and she started to discover happiness inside herself. Eventually, my student did find satisfaction, but only when she stopped trying to change the river and started learning to navigate it.

Stop fixing problems. You can’t fix problems. Problems are effects. They are the natural result of something that was done to cause them. Change the cause of a problem, and the problem will take care of itself.

What causes problems? Failure to persuade; failure to communicate; misunderstanding; fear; doubt; blame; unwanted advice; expecting people to change for your reasons; misinterpreting cause and effect; not understanding the rules of the river.

When you learn to fix the cause of a problem, you will fix that problem’s effect.

In other words, “Why doesn’t so-and-so love me?” is not your problem. While, “Why am I letting this situation affect me so much?” is your problem.

“Nobody listens to me,” is not your problem. While, “How can I explain this so people will want to listen?” is your problem.

Can you see the difference?

The only way to change something is to change the cause of that something. So if you want to affect the river, you need to keep peeling away at the causes of things until you find a cause for which you’re responsible and then find a way to affect that cause. Only then will your actions be worthwhile.

How can you use cause and effect to create a worthwhile ride?
We examine this rule further in the companion book A River Worth Riding: Fourteen Rules for Navigating Life. Click here for ordering information.

What’s the bottom line on cause and effect?

The answers to your questions may not come right away. Don’t worry. For now, it’s enough to ask the questions. Your ability to change the causes of things requires that you understand and incorporate all the rules of the river; but the rest of the rules are useless, unless you first understand the nature of cause and effect.

People who do not understand cause and effect say things like, “If men were intended to fly, they would have wings.”

But people who do understand cause and effect, look at birds flying and think, “If birds can fly, then so can I. All it takes is understanding the cause of flight.”

Not wings, but the effect that wings have on air.

Simulate the effect, and you’re flying to Paris.