Understanding the People in Your Life

A River Worth Riding: Lesson 3
Understanding the people in your life
The Power of Reflection 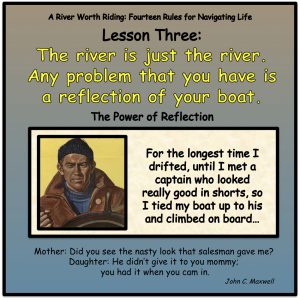 “…For the longest time, I drifted. Until I met a captain who looked really good in shorts, so I tied my boat up to his and climbed on board. His boat was kind of messy, so I started to clean. I kept waiting for him to say thank you, but he was too busy navigating to notice how his boat now sparkled from my work. So, I spent my savings on boat improvements, and I brought things over from my boat so that he would see how useful I was. Still, he barely noticed. Eventually, I got mad at being taken-for-granted and decided to teach him a lesson. So, I stomped back to my boat, which by this time was listing badly with neglect. But instead of casting off and getting my boat in order, I kept messing with the rope connecting our boats until we both almost capsized.

After a week, I went back to his boat to see if he had missed me. He waved and asked me to fix him a cheese sandwich. Despite my desire to throw the cheese at his head, I fixed him a sandwich. After all, his boat was nicer than my own and most of my things were aboard her anyway. Then one day, I heard a rumor that another gal had been seen making my captain cheese sandwiches. How dare she! How dare he!

Back to my leaky boat I went, where I sulked in a foot of water and did nothing of importance for weeks—except for plotting revenge against my captain’s new girlfriend’s boat, which kept me very occupied. By the time I got the energy and nerve to cast off, I was in very deep trouble. I suddenly found myself on a different river with a totally inadequate boat. I nearly drowned. For the longest time, I drifted. Until I met a captain who looked really good in shorts, so I tied my boat up to his and climbed on board…”

You can’t take the rapids in an oil tanker. And if you’re trying to make it down the river with a leaky boat, you’re going to spend your whole life bailing, too terrified to rest for even a moment. So pull onto the shore and get your boat in order. If you are exhausted, it is time to reflect upon the cause of your exhaustion. Your ride will be smoother and a lot more fun. 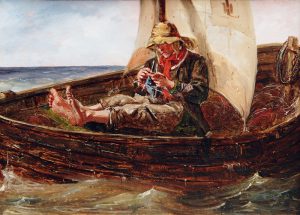 Let me give you an example of what I mean.

I had a partner with whom I worked for several years, and during the entire time we were together, I was mostly discontented with the partnership. I wanted to fix our relationship. I wanted clarification on what our relationship was. What’s more, I wanted that clarification to come from my partner. I wanted him to clarify for me what he wanted out of our partnership. I guess that on some weird level, I figured that if I could understand what he wanted clearly enough, then I could adjust everything in my life to fit into his pattern of things.

My desire to get clarification from someone else reflected how dependent I was on him. It also reflected how unclear I was about what I wanted. Once I saw that I was the one who needed clarification—that I needed to clarify for myself exactly what I wanted—my course became obvious. Because when I did actually clarify what I wanted from life, it became painfully obvious that I didn’t want him. I wanted some unrealized version of him, something that I had imagined. My problem had been in how I had defined my problem. He wasn’t my problem. I was my problem. When I fixed myself, my problem with him just disappeared. I will always be grateful to my partner. He became a reflection of what I needed to learn.

Everything in life is a reflection of what we need to learn, if only we see it that way. When we start to integrate the rule of reflection into the way we interpret our lives, many misunderstandings and problems disappear.

Reflection says that perhaps the reason I don’t trust people is because I don’t trust my ability to understand why people act the way they do. If I could learn to trust my understanding of people, then my trust of people might return. After all, there is one thing that I can always trust about people. They’re human. 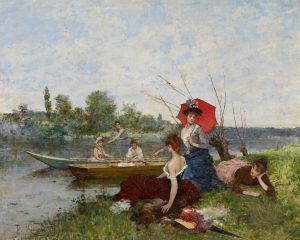 Reflection can help us decipher so many problems.

I once had a student who spent the first two weeks in my class obsessing about her twelve-year-old son and what was wrong with his behavior.

I asked her one day, “Does he do drugs, hang with dangerous crowds, break the law?”

“Are you afraid he’s going to hurt himself in some way?”

“No, he is a great kid, he’s so smart. He could do so much if he would only try harder. I keep telling him that he could be more if he just worked at it. But he doesn’t listen to me. He rolls his eyes at me behind my back.”

At this point, I wondered who had not been listening to whom. I asked her to pretend that I was her son and to role-play a typical discussion. What followed was a list of all the things that I, as her son, should be doing. She would have gone on for an hour if I had not stopped her.

I said straight out, “If I were your son, and that was how you spoke to me, then I’d roll my eyes at you too.” That comment stopped her in mid-sentence. “What do you think your son is hearing when you talk to him?” I continued. “Because what I just heard is that you don’t think he’s good enough, and you want him to change. Who would want to listen to that? If you were my friend, and all you ever did was lecture me about what I ought to be doing, I wouldn’t want to listen to you either. It doesn’t matter what you mean to say. What matters is what he hears. You may think that you are offering love and advice, but I think that he’s hearing you don’t think he’s good enough. You said, yourself, that he’s a good kid and not in any trouble. Have you ever thought that maybe he needs less of your advice and more of your approval? Maybe, if you listened to him for a change, talked with him instead of at him, he might stop rolling his eyes and start wanting your opinion.”

After I finished my tirade, we talked about her situation with the class for a while and developed a strategy that she agreed to. She would hold back any advice for one week and see what happened. She would plan to only have fun with her son that week. She would spend time with him, play with him and listen to him; but she would avoid probing him, or advising him in any way.

A few weeks later, she confided shyly to the class that the night before, her son had put his arms around her and said, “I love you, mommy.”

“He hasn’t done that in ages,” she admitted near tears.

When my student redefined the problem that she was having with her son, as a reflection of a problem in herself and how she communicated her love and concern, she was able to open herself up to a strategy that created the cause she wanted. Her son stopped rolling his eyes and started opening up to her.

Three practical techniques for incorporating this rule into your life are examined further in our companion book A River Worth Riding: Fourteen Rules for Navigating Life. Click here for ordering information.

What’s the bottom line on reflection?

Emerson once said, “What you are screams so loudly that I can’t hear a word you’re saying.” Cluttered words reflect a cluttered mind, just as a cluttered room reflects a cluttered life. If nobody understands you, then maybe you need to reconsider what you have to say.

When you clean up a mess, without cleaning up the mind that created the mess, you’ll only be cleaning up the mess again tomorrow. The designs of your life can only be affected and fixed from inside you. Any fix on the outside will only be a temporary patch, a Band-Aid, as long as the underlying and chronic problems within you remain unchanged.

So don’t keep patching the hull of a poorly designed boat. Get off the river and reflect upon your design. Where does your present design keep landing you, and where would you rather head? The currents that keep engulfing you can actually inspire your new design.

The power of reflection will help you to spot your leaks.