The Power of Your Thoughts and Words

A River Worth Riding: Lesson Two
The power of word choice. How your thoughts, words, and beliefs define your life. 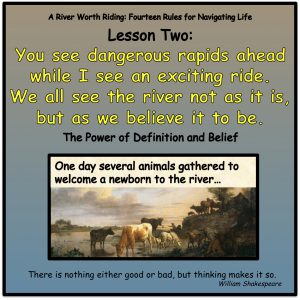 One summer day, several animals gathered to welcome a newborn to the river. “This baby will never breath as it should,” whispered the salmon. “It will drown before it reaches the sea.”

“Don’t you think that it’s too large to move?” murmured the water bug. “It will sink as soon as it plants a foot on the water.”

“Why worry about where it will plant its feet? It’s been alive for over an hour, and it can’t even walk yet,” muttered the deer. “I’ve never seen such a backward child. How will it run from danger with those pudgy, awkward legs?”

“Its legs are certainly too soft. Its whole body is too soft. How will it defend its home?” snapped the crawdad. “And without a way to blend into the rocks, it will surely become someone’s dinner.”

“I don’t know about that, but it will never survive the winter with a coat so thin,” growled the wolf. “And to be born without siblings cannot possibly be good. Who will be left to guard it when the pack goes hunting?”

“This baby will never hunt as it should,” sighed the eagle. “It has poor eyesight. It can hardly travel, and it has no way to swoop down on its prey. Certainly it will starve with all those limitations.”

“Yes,” smiled the baby’s human mother. “My child is perfect.”

The rule of definition and belief says that we all see the river not as it is, but as we perceive it to be.

Whose opinion is correct?

In the eighteen hundreds, many American settlers believed that nature was meant to be conquered and tamed. For them, an untouched forest was a waste of good land. Consequently, forests were fenced, claimed, cleared out and used. On the other hand, most Native Americans saw nature as their home and animals as extensions of their human family. For them, the forest was a great wellspring of life, full of bounty and capable of sustaining them for generations.

When you take people out of their accustomed environment, they face starvation. Some people can’t find food unless they can bring it home in a bag. In a very real way, they are limited by the recipes that their parents have handed down to them, by what they believe and perceive to be edible. Few modern Americans would eat a roach, but some cultures like them chocolate-covered. 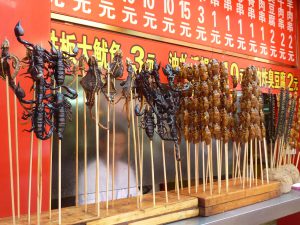 My point is that everyone is right according to their own beliefs. We all see the same world, the same trees, the same patterns and the same currents—but we interpret and define those currents according to our own distinct beliefs. Our reality is influenced by how we define the currents around us, and we all define currents in very different ways.

If you believe that you’ve hit a dead end, you stop trying to move forward.

I have a friend who believes, beyond any doubt, that men “are after only one thing.” Any decent man that she meets immediately sees the chip on her shoulder coming from a mile away and pegs her as a problem-waiting-to-happen; so obviously, she rarely has any nice men interested in her, and she tends to attract only the men who fit into her mold. But even when she does attract a nice man—a man who might be an exception to her rule—she doesn’t believe that such a man is possible. Without even realizing it, she waits for that one moment when he “shows his true colors.” Any man that she meets, regardless of his intentions, can’t stand the pressure of her scrutiny. Any observation that I might make, opposing her belief that all men are dogs, she regards as naive. Eventually, men give her exactly what she wants—proof that they are untrustworthy creeps who always leave her. Her beliefs have become her reality. She only sees the evidence that fits into her beliefs, and she disregards all other evidence as irrelevant. Whenever she meets people who see things differently than she does, she just assumes that they don’t understand how things really are. Her experience has become a validation of her life and her worldview.

I sometime think that she looks forward to the disastrous endings of her relationships because she can finally get on with the true purpose she has given herself—to show the world that all men are jerks.

She is caught in a vicious cycle of her own self-limiting beliefs.

Whenever I tell this story in my lectures, everyone laughs. We all know someone just like my friend. Her limiting beliefs are easy to see. But what beliefs are you caught up in? What limitations have you been arguing for?

Do you ever make statements that cause people to pick sides, raise barriers, offer advice, or start arguing?

I have a student, for example, who likes to say, “I’ve tried everything.” She hasn’t noticed how that belief has influenced her actions, and how her actions have created her reality. You see, on her river, she really has tried everything because she’s also stopped looking for new things to try.

Question your beliefs, or they will limit you. 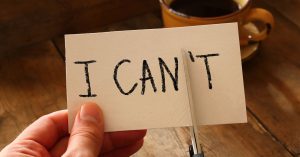 If you want to be free of false limitations, you need to make a conscious habit of examining your thoughts, reactions and emotions. Whenever you catch yourself thinking, “I can’t,” immediately ask yourself, “Why not? Why can’t I? Why do I believe that I can’t?” And whenever you find yourself reacting emotionally to what someone else has said, ask yourself, “What belief system is feeling threatened? Why am I so insecure?” If a belief is based on truth, you shouldn’t feel such a drastic need to defend it.

What does that mean to you?

Redefining beliefs can be scary. If your beliefs have been limited, you might have to admit that all your decisions have been based on limitations. If your beliefs are false, you might have to live for a while with uncertainty. But trust me, any belief worth having will withstand your scrutiny and become stronger. And ferreting out your limiting beliefs, so that you can replace them with beliefs that expand your life, is the only way to make the river of life a trip worth taking.

How can you use the power of belief to redefine your life? If you simply tell yourself to stop believing something, you’re in for a fight. After all, when you believe something completely, finding evidence to contradict that belief is nearly impossible. Besides, whenever you tell yourself to stop believing something, you leave a void in your psyche that your psyche will anxiously want to fill. Yes, removing a belief is extraordinarily difficult, but expanding a belief is surprisingly easy.

We examine this rule further in the companion book A River Worth Riding: Fourteen Rules for Navigating Life. Click here for ordering information.

What’s the bottom line on definition and belief?

So open your mind and explore your definitions. Your life will expand proportionately.