How to Get People to Listen

A River Worth Riding: Lesson Twelve
How to Get People to Listen
The Power of Communication and Understanding 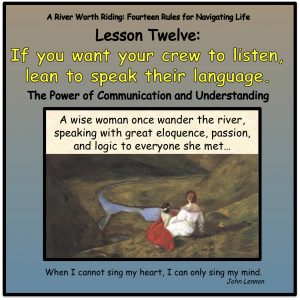 A wise woman once wandered the river, speaking with great eloquence, passion and logic to everyone she met.  She spent nearly a week talking to a waterfall, carefully explaining why a waterfall was an inconvenience to those traveling the river. She pointed out that if the water would just hold itself back a little at the lower end, the level of the river would rise above the fall and everyone would have a smoother ride. But the water was having such fun fulfilling the laws of gravity that it didn’t really pay attention.

Not perturbed, the kindly wise woman turned her attention to a group of boulders, explaining how their existence cause the rapids—a dangerous place to ride. But if they would simply agree to break themselves into sand, we could all have a smooth beach for swimming. But the boulders just sat there, the way boulders tend to do.

She even spent three weeks trying to convince some bears to keep away from the salmon; pleading with them to stop eating others and consider being nice. But the bears were hungry, and nearly ate her when the salmon stopped running.

This sweet lady has not given up her quest for understanding. But she has come to believe that bears are quite rude, that boulders are stupid, and that waterfalls only think about themselves. However, if you want to communicate with bears, you first have to understand the language that bears respond to. And if you want to communicate with a person, you first have to understand what makes that person tick.

I used to be that wise woman, endlessly talking but seldom getting through; until I discovered that the trick of getting through to people begins with learning how to communicate. Communication is not talking, so don’t confuse the two. Just because you’re talking, doesn’t mean people are listening. Just because you have a valid opinion, doesn’t guarantee that people are open to your words.

Communication is circular. We usually send a message because we’re hoping for a certain response. But too often we don’t consider how our message must be sent to insure that we get our desired response. We just start talking, and then we get frustrated whenever people don’t react as we’d like. We fail to say what we mean, and then we fight over whatever we said. We can listen to people so long as we agree with them; but the moment we disagree, we stop listening and start defending our perspective.

Communication is not about agreeing; it’s about understanding.

The word communication is derived from the Latin word for “common.” In other words, communication is the ability to bring separate minds together in a common understanding. Whenever we sincerely communicate with people, we create rapport. What is rapport? The dictionary defines it as, “a connection between people, an affinity, a harmonious, or sympathetic relationship.” But too often, people use communication to prove a point, not to create rapport.

Do you know Einstein’s definition of insanity? “Expecting to solve any problem from the same level of thinking as you were at when you created it.” Well, if your relationships are unsatisfying, then perhaps the cause of your dissatisfaction flows from your inability to communicate effectively.

Communication is a revolving process. You send a message. Someone interprets your message and sends back a response. You interpret their response and send another message, and so the cycle continues. But at any point within that cycle, communication can hit a barrier and break down. Communication barriers are many: noise, interruptions, prejudices, assumptions, vague meanings, emotions, attitudes, misunderstandings, techno-babble, unclear thoughts, defensiveness, criticism, and boredom.

You need to notice when and why that cycle breaks down if you want to keep that cycle moving. So, let’s take a look at the rules of effective communication and see how you’ve been doing. 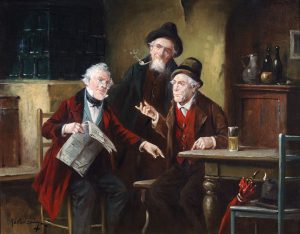 I had a student come up to me once and ask how he could get people to understand him. I began to explain that people come to conversations from different levels and perspectives.

“I already know all that,” he interrupted, “but how do I do it?”

“What do you think I was about to say?”

“That I have to bring people to my level.”

“Nope. In fact, that’s the exact opposite of what I was saying. You can’t expect people to come to your ‘level.’ You have to go to them. People can’t understand you unless you speak their language, and you can’t speak someone’s language unless you actually learn it.”

“The same way you learned English, by listening to people speak.”

Unfortunately, most people are so busy listening to their own thoughts that they rarely have room in their minds for anyone else’s.

.One last comment before we move on, whenever people discover that I teach a class in listening, they immediately joke about enrolling their spouse, their kids, their employees, or their boss. Few people ever suggest enrolling themselves. But do you remember the power of reflection? Well, reflection suggests that if you’ve been complaining about people not listening to you, then you’ve probably not been listening to them.

The tools of effective listening and communication are explained fully in our companion book A River Worth Riding: Fourteen Rules for Navigating Life. Click here for ordering information.

What’s the bottom line on communication?

When we fail to listen reflectively, we often respond to misunderstood messages. If we want to communicate effectively, we have to listen to the messages hidden beneath the spoken word. Reflective listening is not always required for understanding. When people are open, in rapport and having a good time, then reflective listening isn’t necessary. But when people are emotional, defensive, upset, or confused, then reflective listening becomes the number one tool for helping them to sort out their problems. And helping people to fix their own boats requires that we move on to the next rule, the power of persuasion.