A River Worth Riding: Lesson Fourteen
Effortless Living
The Power of Indirect Effort 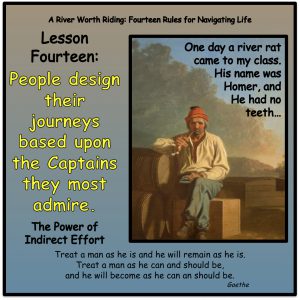 One day a river rat came to my class. His name was Homer, and he had no teeth. As he listened to me speak, his head cocked to one side and his tongue poked slightly from his mouth. His clothes were ill fitting and wrinkled, as though he lived in nothing else. His belly hung out, too big for his pants. If I had bumped into this river rat any place else, I might have turned away and hurried past. But here he sat in my class, at the back of the boat, never saying a word. I gave my class an assignment to conquer a fear. I told everyone that in my class each week, they were expected to stand up and speak their minds.

After class, this odd rat came up and said, in a strangely calm voice, “I understand what you want us to do, and I want to do it, but I don’t know if I can.” I saw that he was trembling and trying to control his anxiety. His mouth gave away his fear. I saw perspiration, which he tried discreetly to wipe away, begin to form above lip.

Smiling my most patient smile, I looked into his eyes and began to speak. But I stopped, suddenly in awe. As I looked into his face, I saw concerns similar to mine and I glimpsed, behind his fear, a mind amazingly like my own. He even had my father’s eyes.

I spoke with this rat for half an hour and discovered in him the man that he was.

One week later, a river man spoke in front of my class, and reminded me that wisdom and courage can be found in many packages. The next week, he turned in the best writing assignment in the class. The following week, he brought in a book and asked me to read something. That “something” turned out to be a poem that he had written and entered into a contest. He had won the contest, and his poem had been published in the book.

This river man had an appearance that might turn many away, but I’m glad that I saw him clearly. He is a poet, named Homer; and I am the better for knowing him. He reminds me that the world is a book somewhat tattered and torn, but the contents are always worth reading.

I never understood compassion until the day I finally felt compassion. Compassion gives me faith, patience, wisdom and hope. Compassion only became possible for me the day that I began to see myself in every face I met. We cannot create compassion. We cannot force ourselves to feel compassionate. Compassion creates itself through the power of indirect effort. 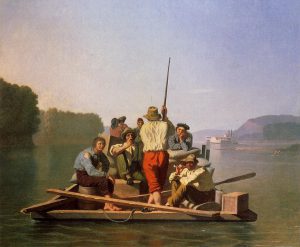 Indirect effort says that we cannot change the river, we can only change ourselves; but the moment we change ourselves, the river changes indirectly. In other words, we get more from people by being more to people. Whenever we try to get more from our relationships without bringing more to our relationships, we end up capsized and wondering what we did to deserve so much misfortune. The currents of life flow in the path of least resistance. So stop swimming against the current. You can’t force the river to change.

Have you ever noticed that when you tell a smoker that smoking is bad for them, they get a nicotine fit and smoke all the sooner? And the more you scream, “hear me out,” the less inclined people are to listen? The same thing happens with any relationship. The more you try to control people, the more out of control those people become. The more you try to make people commit to you, the more you drive them away.

People waste so much time demanding what they haven’t earned.

Demanding, defending and fighting will only hurl you into a whirlpool…

The principles and techniques for incorporating indirect effort into your life are examined further in our companion book A River Worth Riding: Fourteen Rules for Navigating Life. Click here for ordering information.