How to Impeached a President: Kids and the Constitution

How to Impeach a President:

Kids and the Constitution

It all began when I took out the Presidential Cards that I made a few years ago in order to provide a “Knowledge Challenge” in honor of Presidents Day for my Passport Kids. 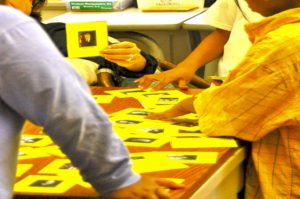 I love the spontaneous learning that occurs during the conversations that these challenges inspire.

The challenge was to put all the Presidents in order, from Washington to Trump. As a bonus, I asked them to name the eight Presidents who had died in office and how they had died. Over the years, I have found that Presidential deaths make a great conversation starter with the kids, and they end up asking questions about all kinds of stuff. What can I say? If it works, keep working it.

So at one point, Gecki, a precocious eight-year-old girl, asks, “Why is there a mirror on the back of the last card?”

“That is because we don’t know who the next President will be yet, and someday it could even be you.”

Satisfied with my answer, she goes back to playing with the other kids. Soon I hear an argument start about which of the kids is going to be the next President. I ended the argument with a spontaneous announcement. “We live in a Presidential Democracy, so if you want to be President, you need to run for office. Write your names on the board if you want to run, and we will have an election.” While the kids jostled to write their names on the board, I scrambled to find my post-its. 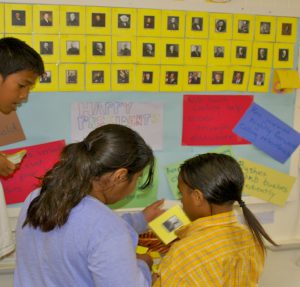 Is it McKinley then Roosevelt?

After their speeches, I passed out the post-it ballots. The most common questions were, “Can I vote if I am running?”, and “Can I vote for myself?” To which I answered, “In a Presidential democracy, you can. Everyone can vote, even Miss Lucy and me.”

We tallied the votes and announced the victors; Jerome was President, and Gecki was Vice President. I grabbed my pocket Constitution–yes I am a nerd who carries a pocket Constitution in my purse–along with some old donated coasters that I had kept because they looked a little like awards. “Time for the inauguration,” I called out.

“What is an inauguration?” one of the kids asked.

“It’s when they take their oaths of office,” I answer. “Come watch.”

Halfway through the ceremony, two of my other regular kids entered–late because of basketball practice.

“We are swearing in our new President,” came the answer.

“I want to be president.”

“Too late, we already voted.”

I informed him that only the House of Representatives can impeach the President.

“Then I want to be that,” and so while I put a quick diagram of the branches of our federal government on the board, the kids held a special election to fill the vacancies in the House and Senate. They declared their intention to run, gave speeches, made promises,  and finally voted. 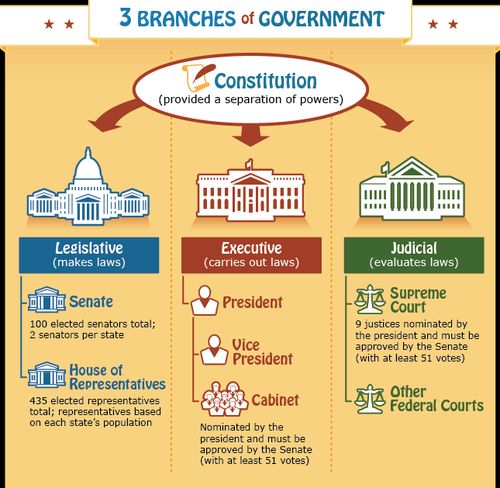 Brian was voted Representative for the fifth grade, and immediately after the swearing in, he got the House to impeach the President.

His joy was a bit squashed when I told him that the Senate had to hold a hearing to judge whether of not to uphold the impeachment, and in the meantime, Jerome was still president; then I told Jerome that he might want to appoint someone to the Supreme Court.

Jerome scrunched up his face, looked around and said, “I will appoint….YOU!”

“I think you have made an excellent choice, and I promise to uphold our Constitution. Now let’s see if the Senate will approve your appointment.” The Senate did, and I let the President swear me in because we had no other judges to swear me in.

Next we held an impeachment hearing, and try as he might, Brian could not get the Senate to agree to impeach Jerome.

With the day nearly over, the kids demanded to know when the next election would be. “Well, I suppose if we make years into weeks, we should have our next election in two weeks for Representatives, six weeks for Senators, and four weeks for President and Vice President,” I told them. Not satisfied, Gecki asked if we could make impeachment against the law, so we had a discussion about what is required to amend the Constitution. When they asked about how long I would be judge, I proudly explained the meaning of life time appointments. Brian wanted to know all the powers he had as Speaker of the House, so I got out my pocket Constitution and before I knew it, I had six heads crowded around avidly listening to me as I read parts of the Constitution to them.

Brian was thrilled to learn that as House Speaker, he was third in line for the Presidency. He was also intrigued that in 1778–the year the Constitution was finally ratified–they wrote the word choose as chuse, which sparked a new discussion about how languages evolve.

The saga will continue, as we will be keeping this new game a permanent part of our after school program. It has been over a week, and they haven’t tired of playing it yet and my pocket Constitution is referenced daily. Moreover, I daresay that my kids know a bit more about how a Presidential Democracy works than some adults I know.

Games really are the best way to teach.

A Goldmine of Resources at The Southern Poverty Law Center

Plan an International Game Competition with your Consulate Kids

A Game that Teaches Kids the Value of Trust in Relationships